This is the second part of my StarViper unboxing. In the first part of this article, I talked about ship as a model, its basic statline and maneuver dial.

This second part examines the named pilots and upgrade cards – everything to really tool up and customise your StarViper for a space battle!

The StarViper Expansion Pack for the X-Wing Miniatures game comes with four pilot cards: The generic Black Sun Enforcers (pilot skill 1) and Black Sun Vigo (pilot skill 3), as well as the Prince Xizor, leader of the Black Sun himself, and his bodyguard and human replica droid Guri.

Prince Xizor is the top pilot for the StarViper, though his pilot skill of 7 is slightly below most top pilots of other ships. His ability to palm off damage to nearby ships – and inverse Draw Their Fire – is very thematic, both for the crime prince himself and for the Scum and Villainy faction as a whole.

That said, Rebels are probably still better suited for squadrons using Draw-Their-Fire-like abilities, as they have more ships that can regenerate shields.

Guri has the more interesting ability, I believe. Her ability to gain a free focus up and close to the enemy synergises very well with the StarViper’s role as a close-combat dogfighter and frees up an action to use for barrel roll and/or boost (with abilities like Push the Limit)

Both Guri and Prince Xizor can take an Elite Talent.

Let’s start with the cards unique to the Scum and Villainy faction. 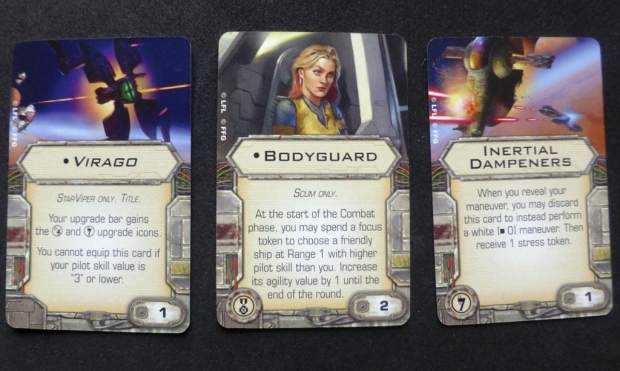 Virago is the StarViper’s unique title. It can only by used by Prince Xizor and Guri and adds the ability to equip both Illicit and System Upgrades to the ship, opening up a lot of customisability.

Bodyguard, featuring art work for Guri, is a card obviously designed for Guri. It works well with Guri’s ability to generate a free focus. It makes Guri a nice companion, especially for large ships (more so than Prince Xizor), allowing her to boost the other ship’s agility. I am tempted to try with with, say, a Firespray 31.

Inertial Dampeners is a one-use-only card, though it can be a nice surprise to stall out a pursuing ship. It is also a cheap upgrade.

Upgrade cards from this expansion that anyone can use.

Autothrusters – the one Modification that brought arc dodgers back into the game against turrets. These days, it is impossible to go to an X-Wing tournament and not see Autothrusters. Arguably. this upgrade – and you get two in the expansion – sold FFG more StarViper expansion packs as the ship itself.

Hull Upgrade – A card seen before and, in this expansion, arguably meant to go on Prince Xizor’s ship, potentially making him a bit more tanky.

Yes. Two more. There really is a lot of fun things in the StarViper expansion pack!

Calculation – a Elite Talent featuring Prince Xizor himself (don’t expect to get this from other expansions anytime soon. Yet another way to use of Focus Tokens (the Episode VII starter set added a few of those too). Situationally powerful and cheap, but I would not use it over abilities like Predator.

Ion Torpedos – a secondary weapon I have not used. This torpedo has great potential to wreak havoc among swarms of small ships. Imagine taking out somebody like Howlrunner with the Ion Torpedo and (!) ionizing her swarm. Still, 5 points is a lot to gamble on a one-shot weapon.

It should be noted that the expansion also comes with 7 (yes, seven!) Ion Tokens, in case the Ion Torpedo (the only ion weapon in the expansion) works as intended!

Autothruster modification cards put the StarViper expansion pack on the shopping list of every X-Wing tournament player. Yet even ignoring the Autothrusters, I feel this expansion offers a lot for budding Scum-and-Villainy-players.

The StarViper is definitely an expansion worth buying!