The StarViper, signature ship of the Black Sun elite in the Star Wars universe, is a very unique and well-designed ship, both in its looks and how it plays on the table, even if the expansion is perhaps often bought mainly for its upgrade cards.

There is a lot to talk about, so I will split this unboxing of the StarViper Expansion Pack for the X-Wing Miniatures game. into two parts. 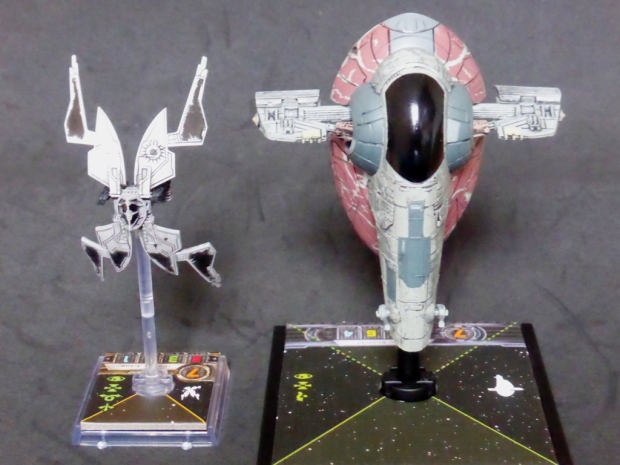 Let’s talk about the StarViper ship as a miniature.

The StarViper is an elite ship, and its design and size give it a suitable presence on the table. It is one of the larger ships on a small base in the X-Wing miniatures game, though its vertical design make the model far less wobbly or prone to snagging other miniatures than, for example, the likewise large (for a small base) K-Wing.

The StarViper also has that somewhat intangible „Star-Wars-look“, that (in my humble opinion), not all Scum and Villainy ships managed to capture.

It certainly is, to me, a big visual draw to building a Scum and Villainy squadron.

The StarViper is a high-end dog fighter. It comes with 3 attack, 3 agility, 4 hull and a shield (!), as well as the ability to both boost, barrel roll and target-lock, putting it on par with a TIE-Interceptor with hull upgrade, shield upgrade and targeting computer (minus the ability to evade).

At 25 points for the most basic pilot – the Black Sun Enforcers – it is not a cheap ship. Its excellent mobility and reasonable resilience make the StarViper an excellent platform for an elite Scum-and-Villainy-arc-dodger.

Moreover, any StarViper can equip a torpedo, giving the ship the option for some extra punch. Curiously though, the StarViper cannot, by default, use the Scum and Villainy faction’s trademark illicit upgrades. 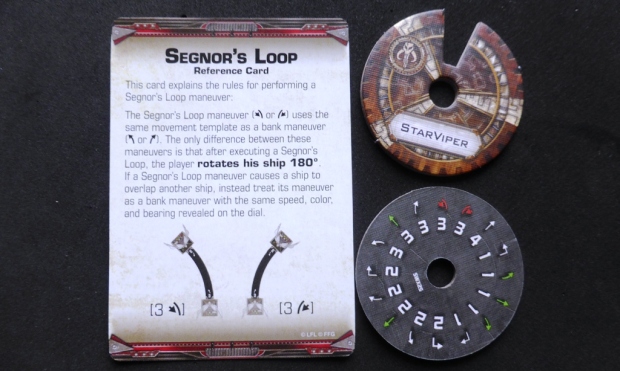 If the StarViper has an excellent statline for a nimble dog-fighter, it’s manoeuver dial is just as great.

It can perform all speed 1 and speed 2 maneuvers, making it extremely mobile in close quarters. Many of them are also green maneuvers, allowing the StarViper to shed stress relatively easily.

The StarViper can also cover distance with a straight 4.

Most notably, however, it can use the Segnor’s Loop maneuver, a new manoeuver first introduced to the X-Wing Miniatures game with the Scum and Villainy faction (though the Episode VII TIE/Fo-Fighters since learned to copy this trick).

In summary, I have to say I really like the StarViper. It is a unique-looking ship, which – especially in absence of a large ship like the Slave I – makes a splendid centre-piece for a Scum-and-Villainy-squadron.

The StarViper clearly feels right at home in the thick of things, dodging and weaving around enemy ships at close range.

In part 2 of this unboxing, I will therefore take a look at some of the upgrades and named pilots of this expansion, seeing if the best pilots in the StarViper can match the game’s more famous arc dodgers like Soontir Fel or Tycho Celchu.