Continuing with my project of painting up Fantasy Flight Games‘ Imperial Assault, I started working on the Trandoshan Hunters, whose most notorious representative is the Bounty Hunter Bossk from The Empire Strikes Back.

Once again, most of my inspiration came from the fantastic YouTube guide by Sorastro’s Painting.

Once again sticking closely to Sorastro’s Painting tutorials, I painted two variants of Trandoshan Hunters. Two Trandoshan Hunters in a snow/urban camouflage and two in a yellow-green jumpsuit similar to Bossk from The Empire Strikes Back.

For the yellow-green I used a roughly equal mix of Flash Gitz Yellow and Elysian Green. It’s a wonderfully „ugly“ colour in the best Star Wars tradition, and one I certainly would not have come up with on my own.

Other base colours I used so far are: 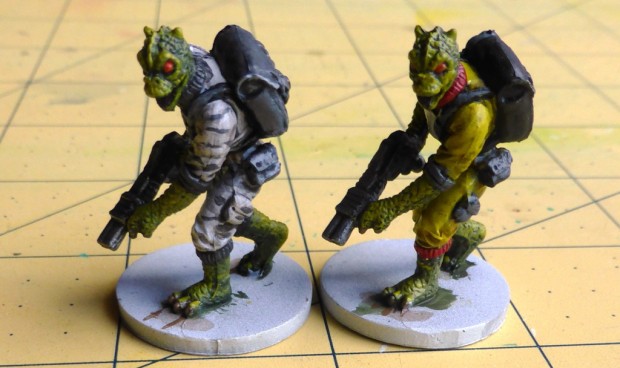 After the base colours, I shaded the yellow-green jumpsuit, the mouth and the red parts with Agrax Earthshade and the white jumpsuit, the backpacks, weapons and grey trims with Nuln Oil.

The yellow-green jumpsuit was  highlighted with the abovementioned 50/50 mix, adding more yellow with each step. I also gave it a glaze of Lamenters Yellow.

And I keep finding mould-lines. Note to self: Clean the miniatures properly! 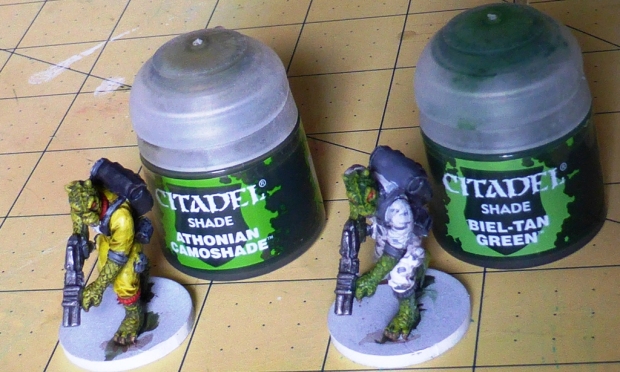 For the skin itself (or scales), I took another advice from the fantastic tutorials by Sorastro’s painting, shading different Trandoshan Hunters with different green shades from Games Workshop to achieve a variety of skin tones.